A decade ago, the mere suggestion of a festival celebrating coffee in the UK in the earshot of an Antipodean would likely have been met with a rather colourful choice of language far removed from Their Majesty The Queen’s English.

We were not, you see, a country that was looked fondly upon for the quality of our coffee by our friends down under, and perhaps rightly so. Melbourne’s history of Italian immigrants and Sydney’s ‘invention’ of the flat white in the mid-80s has seen the development of the worlds most progressive coffee market over the last 30 years.

Fast forward to 2011 and the UK was set for change with the vision of (yep, another Aussie) Jeffrey Young, the man behind Allegra Events, putting one of Europe’s largest festivals dedicated to the coffee bean well and truly on the map: The London Coffee Festival.

Catching up with Jeffrey last weekend with the festival in full swing, he chirpily informed me that the number of visitors to the festival, held annually at the Old Truman Brewery, has rapidly risen from a not miserly 6000 in its first year 5 years ago to well over 20,000 in 2016.

To those who haven’t been, the LCF provides an urban backdrop of baristas, roasters and everything in between (frothy oat milk, anyone?), so hip I couldn’t help but feel a whisker out of place with my clean shaven face and button down shirt, so I donned a swagger and played ‘cool’ for the day. I think the DJ might’ve helped. Or perhaps it was the sheer volume of coffee.

Needless to say, there was more caffeine being given out than even I knew how to handle, roasted every which but loose, with thankfully just enough fresh juice, soda and said alternative milk exhibitors to stave off any heart palpitations and provide a welcome reprieve.

But, ultimately, I was here for the coffee and, beards and braces aside, the LCF16 certainly didn’t disappoint.

Here are some of my highlights: 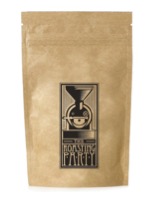 Huehuetenango in the north highlands of Guatemala are exceptional coffees with distinctive fruity flavours. This, from the Aussie roasters down in Winchester, is packed full of citrus with a velvety, vanilla chocolate finish – delicious.

My go-to flat white (not just because our office is 5 doors down from their flagship coffee shop and training centre in East London, though I’m not complaining) this El Salvadorian/Nicaraguan blend comprises 65% Finca Los Altos and 35% Finca Santa Elena coffee beans for a no nonsense, straight to the point cup with light notes of creamy chocolate, walnut and caramel. Roasted in Cornwall and well worth getting out of bed for. 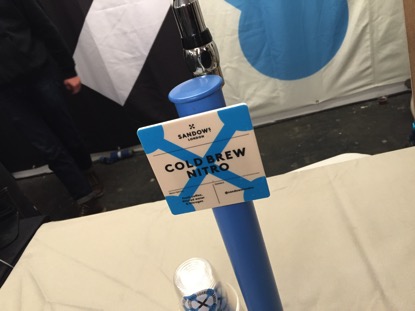 Cold brew coffee is gradually picking up traction and this dispense system, using nitrogen much the same way a pint of the black stuff does, provides an ice cold coffee with a thick, creamy head.

Taps are all the rage don’t you know so, yes it’s hip, but more importantly, it just tastes so darn good! Currently very limited availability but expect to see it popping up in places where the cool kids hang out, including Shoreditch Grind. 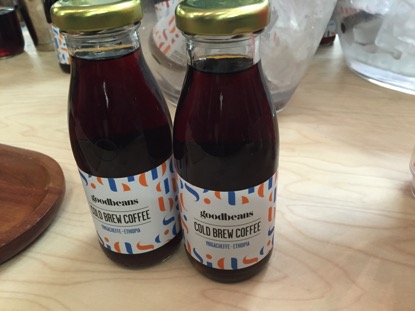 Another cold brew coffee, goodbeans is owned and brewed by the rather lovely Rosa Escosa and childhood friend Becky Neale who, between the two of them, have rustled two extraordinary single origin expressions to try from. If you’ve never tried cold brew before I do recommend getting one of each and trying them side by side – there’s something about this method of extraction that brings out the subtle nuances of the bean, which are lost with regular extraction with heat, and these two very different beans show just what cold brew is capable of.

Okay, okay, it’s not seen a coffee bean but when two natural sodas at a coffee festival taste this good it would be criminal not to mention, well, just how good they are! Kitsch have been producing soda in Edinburgh since June last year where Craig (pictured) has been perfecting two flavours: Rhubarb & Thai Basil and Cucumber & Fennel Seed, both as delicious as each other with no nasties whatsoever and packed full of flavour. Apparently he might produce a cola, but then again he might not. I couldn’t care less either way. If you see either of these flavours anywhere, buy the lot as quick as you can and drink them even quicker.

Hello Gorgeous! We’re a London-based consultancy that have been creating amazing stories for the hospitality industry since 1999.